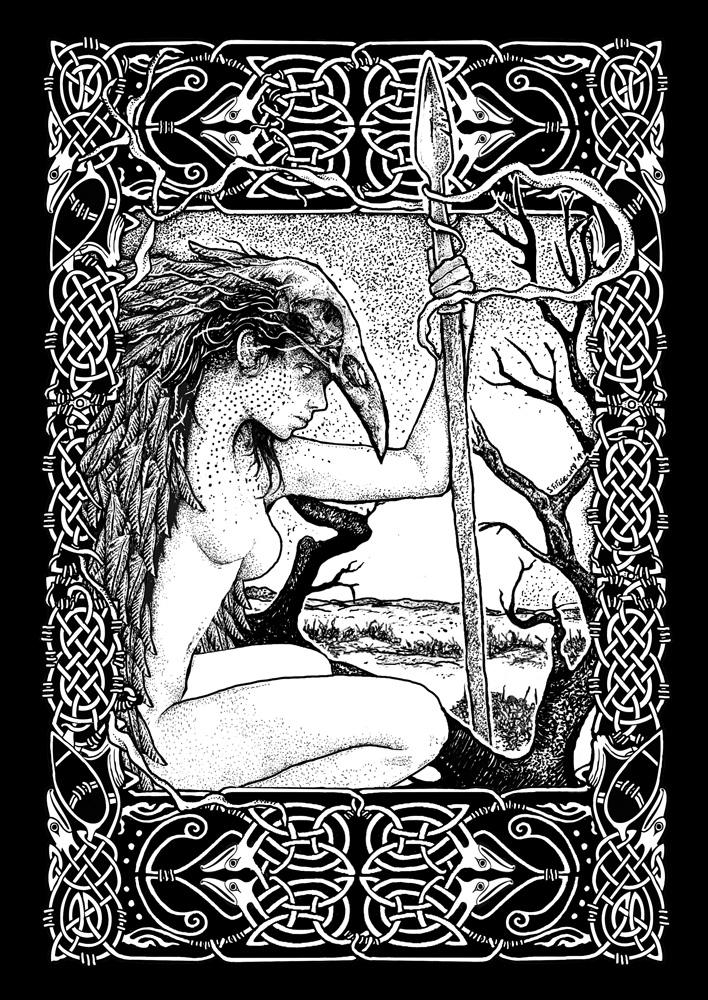 Sean Fitzgerald lives in a remote area of the North West of Ireland. His art investigates the darker elements from Irish mythology, folk magic, Gnostic concepts, and sacred sites. The resulting drawings are dark motifs which are intricately layered with traditional knotwork and full of powerful symbolism.

He has a book out this year on Hill of Tara Press called, ‘The Last Battle of Moytura’.

Chloë Feldman Emison has shown her drawings and animations widely in the United States and Europe, while working also as an illustrator. She studied fine art at Williams College and at the Ruskin School of Drawing and Fine Art, Oxford University, and animation at Forkbeard Fantasy in Devon. She was a visiting artist at Wasps Studios in Glasgow, and completed residencies at the Contemporary Artists Center in Woodside, N.Y., at The Old School Art House in Iceland,  at the Vermont Studio Center, and at Can Serrat, near Barcelona. In 2013 she taught animation at the Eagle Hill School in Hardwick, Massachusetts. She was named an IEAA laureate in the 4th International Emerging Artist Award, the exhibition for which was held in Brussels (May-July, 2016).
She has collaborated with the Elements Contemporary Ballet company in Chicago on visualizing a new ballet about Atlantis and has designed numerous can labels for Lamplighter Brewing Company in Cambridge, as well as murals and merchandise items. Her illustrations have appeared in various literary magazines and she has been featured in the 10th International Drawing Annual, Manifest Gallery, Cincinnati.  The artist grew up in Lee, New Hampshire and currently is staying in Dublin.

Claire Apricot is a freelance illustrator working in Massachusetts, USA. She is interested in telling stories that are full of mythical and fantastical elements. She depicts in this work a man encountering a colossal sea serpent in the open ocean. This picture leaves an open-ended question of what will happen to the man that has fallen into the sea.
She is fascinated by history and the tales woven from the past, and wants to tell stories of her own through her art. You can find more of her work on her instagram:
https://www.instagram.com/claireapricotart/ 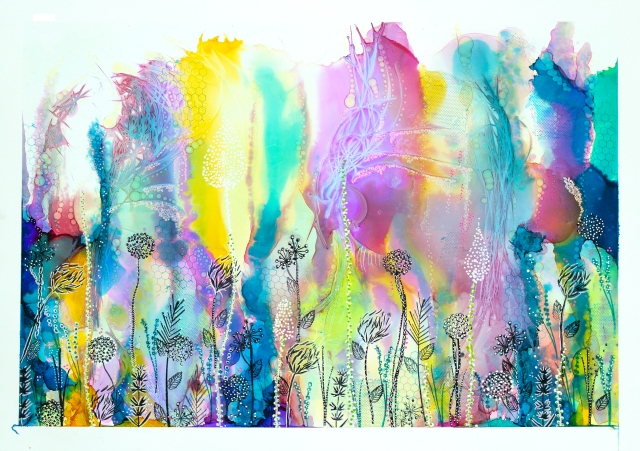 Stacey O’Flanagan is an emerging artist from Dublin with a passion for mixed media and in particular for alcohol inks. She studied art in BCFE before travelling through Asia and new Zealand. She has 2 children and works from home selling and teaching art. To see more of her work, please visit www.instagram.com/thecolourfulheartist

Using the techniques of stencilling, collage and drawing, Julie Bradley creates mixed media works on paper which investigate the idea of connectedness and express aspects of an emotional landscape and states of being.

Julie trained in printmaking at the Australian National University -School of Art and also studied at the University of New South Wales where she received a graduate diploma in professional art studies. Her work has received numerous awards.
She currently works as a professional artist from her studio at ANCA –Canberra and her work is held in the collections of the National Gallery of Australia, the Australian National University, Canberra Museum and Gallery, the University of Canberra Collection, Bundanon Trust, Calvary Hospital Birth Centre, Canberra Hospital and the Lu Rees Archive. 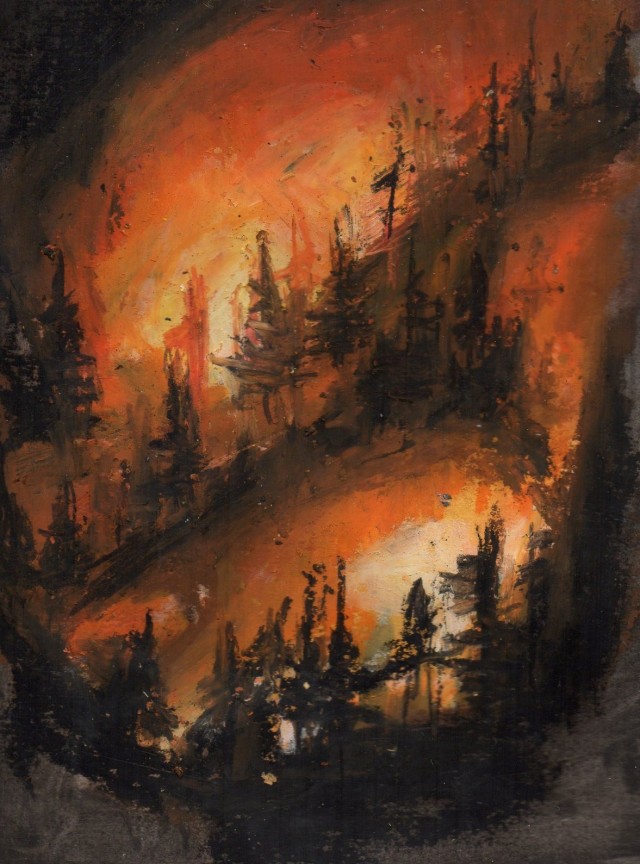 Katharine Paisley is a Visual Artist currently based in Northern Ireland, after completing a BA Fine Art degree in the North West of England.  She creates representational oil paintings and experimental videos which, explore the evidence behind the Anthropocene. The Anthropocene is the proposed new geological epoch that scientists believe we entered when the first nuclear bomb was dropped on Hiroshima, Japan. The transition into the Anthropocene signifies the undeniable and irreversible impact of human activity on the Earth’s biology and acknowledges human presence as a geophysical force. 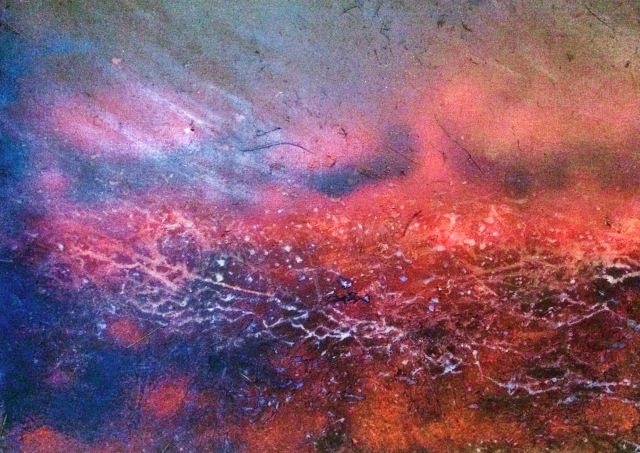 Christina has a Fine Art Bachelor Degree coupled with experience in Graphic Design and Branding. Art combines her interest in design, landscape and psychology. It consists of searching for an amalgam of drawn geological forms and the interior architectural structure. Capturing moments of time through colour, temporal aspects of the landscape interiors and outdoors. Inquiring and exploring on the relevance and impact of the perimeter of the painted natural landscape and the interior space, these landscape paintings are in dialogue with environment.

Niamh Dorgan (b. 1995) is a Cork based Irish Visual Artist and recent graduate from the Limerick School of Art and Design. Dorgan’s artwork is influenced by the semiotic theory of ‘umwelt’ a term used in ethology meaning the world as it is experienced by each individual organism. She is interested not only in how our surroundings shape us as organisms, but how we, in turn, alter our environment.
Website: https://niamhdorgan.weebly.com

Natalia, a graduate of Carleton and University of British Columbia, spends her days as a licenced architect, working on mixed-use and health care projects across Canada. However, her mornings she spends as a visual artist and alternative photography printmaker, exhibiting locally in Toronto, and internationally in UK and USA. Her work has been selected to be part of several international juried group exhibitions and fairs, invited group and solo shows. Natalia has been published in The Hand Magazine, Canadian Interiors Magazine and Cyanotype: the Blueprint in Contemporary Practice book. In the evenings, she builds sets for independent
and professional theatre companies, for short run shows, festivals, and workshops. And at night, Natalia occasionally performs on stages of The Tranzac Club, The Penthouse and Tallulah’s Cabaret in Toronto and Vancouver.