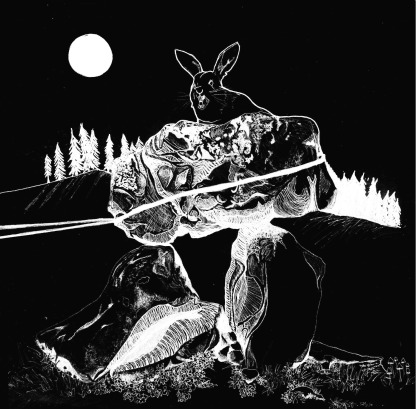 *
*
The image was originally created to accompany a piece of music Mary wrote, which in turn was inspired by a myth surrounding a dolmen called The Devil’s Den.  It is located in the Marlborough Downs in Wiltshire not too far from the sacred naval of the neolithic world, Avebury.
The legend of this Dolmen is found in A.G Bradley’s ‘Round about Wiltshire’ (1906) in which he writes of a demonic rabbit with lurid coals for eyes who appears on a full moon and sets about toppling the great cromlech with the aid of many white oxen.
*
Biography
Mary Keane is an Irish artist working in illustration, music and film.  Her work tends to be a form of nature worship often pivoting around the uncanny.